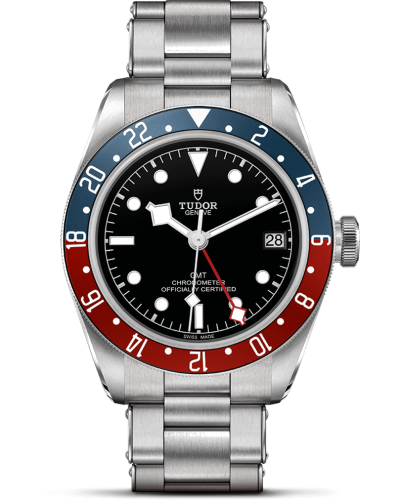 Presented at Baselworld 2018, TUDOR’s famous Black Bay divers’ watch is now available with a new GMT function that establishes local time without losing sight of the time in two other time zones. Fitted with the Manufacture Calibre MT5652, the Black Bay GMT sports a distinctive burgundy and blue bezel.

Designed to withstand the elements
The Black Bay GMT features a 41 mm satin-brushed steel case, waterproof to 200 metres (660 ft). Luminescent hour markers set against the black dial ensure legibility at night-time -- and in all conditions. The dial features a GMT marker at 6 o’clock.

The Essence of Black Bay
Like other models in the Black Bay family, the Black Bay GMT features a dial inspired by the TUDOR divers’ watches of the 1950s. It adopts the characteristic angular hands known to collectors as snowflake, that appeared in the brand’s 1969 catalogue. Finally, the large winding crown, characteristic of the first generation of TUDOR divers’ watches to be waterproof to 200 metres (660 ft), is also presented in this new model.

A 24-Hour Rotatable Bezel
The Black Bay GMT features a matt burgundy and blue bezel, colours commonly found within the Black Bay family. The bidirectional rotatable bezel is calibrated for 24 hours: the twelve daylight hours are printed on the burgundy section and the night-time hours on the blue. Additional time zones are indicated by a red Snowflake hand, which spins around the dial in 24 hours.

The Calibre MT5652 has the appearance and finish typical of TUDOR manufacture calibres. Its openwork rotor is satin-brushed with sand-blasted details and its bridges and mainplate have alternate polished sand-blasted surfaces and laser decorations. Its structure was designed to ensure robustness, longevity and reliability, as has its variable inertia balance, which is maintained by a sturdy traversing bridge with a two-point fixation. Featuring a 70-hour power reserve, the manufacture calibre MT5652 is certified as a chronometer by the Swiss Official Chronometer Testing Institute (COSC).

The history of the TUDOR divers’ watch dates back to 1954 and the launch of reference 7922. The first in a long line of ergonomic, legible, accurate and robust divers’ watches, it perfectly embodies the approach formulated by the American architect Louis Sullivan, according to whom the form of an object must follow its function. Furthermore, it laid down the aesthetic and technical foundations of an ideal divers’ watch, those of an understated, functional and reliable tool. The sixty years that followed the launch of the original 7922 saw the constant improvement of the TUDOR divers’ watch and each model gained unanimous acclaim from professionals in the field, including some of the greatest military navies in the world.

The distinctive Black Bay GMT captures the essence of the Black Bay in version for world travellers.