Determination, freedom, comfort: the myth of the Santos de Cartier watch has been maintained throughout the successive decades since its creation in 1904 and goes way beyond the legend of Alberto Santos-Dumont. In the age of engineering, at the dawn of the 20th century, its revolutionary design and usage echoed the spirit of speed and progress. Its distinctive aesthetic symbolised the modern era.

The new Santos de Cartier watch stays true to this original philosophy by reflecting the innovative, ever- changing spirit of its own age.

A VEHICLE FOR ELEGANCE

In updating this timepiece, the design studios focused on comfort,intelligent proportions and respect for the Santos aesthetic:

- The square shape remains unchanged. It echoes the refinement and symmetry of Parisian geometry of the era, as extolled in the four angular corners of the Eiffel Tower. In giving preference to straight lines, this transgressive shape represented a break with traditional rounded watch shapes.

- Also unchanged are the eight screws on the bezel: this functional hardware is a miniature tribute to the proliferation of mechanical steel structures associated with a golden age of urban architecture. Here, Cartier dared to display a functional element that had been hitherto concealed.

The design of the bezel has been updated to favour the synergy between the lines of the case and the strap. These sleeker lines accentuate the stylistic dynamic of the watch.
The watch is designed for a perfect fit on the wrist and has been precisely weighted and measured to optimise comfort and ergonomics.

The strap is the defining element in the history of the Santos de Cartier, the first modern wristwatch. The original strap was in leather, a totally new material in watchmaking, and left the wearer free of the restrictions of the pocket watch.
The new Santos de Cartier watch features an innovative strap in keeping with the spirit of our time. The new strap caters to modern lifestyles and ease of movement, and can be tailored to suit any occasion according to the choice of materials and colours.

Available in steel, gold, calfskin or alligator skin, all versions are interchangeable thanks to the Cartier QuickSwitch system (patent pending) hidden under the strap. This invisible mechanism blends into the structure of the case and, to activate the system, the wearer simply presses the mechanism.

Another cutting-edge feature is the SmartLink self-fitting technology (patent pending) which adjusts the length of the metal bracelet to the nearest link without the use of a tool. At the touch of a button located on each SmartLink, the attachment bar is unlatched and one of the brushed metal links with screws can be added or removed from the Santos de Cartier watch.

A CALIBRE AND A TIMEPIECE FOR THE MODERN ERA

True to the constant quest for progress that spurred on every new venture for Alberto Santos-Dumont, the 1847 MC automatic calibre and the latest design of the Santos de Cartier watch are ever more ambitious in terms of performance and comfort.

The calibre 1847 MC features anti-magnetic nickel phosphorus components in the escapement and movement mechanisms, as well as a shield made from a paramagnetic alloy, rendering the calibre effectively resistant to the powerful magnetic fields a watch may be exposed to in everyday life.

Thanks to the screw-down assembly design, the new Santos de Cartier offers water- resistance up to 10 bar (~100 meters) with minimal case thickness. 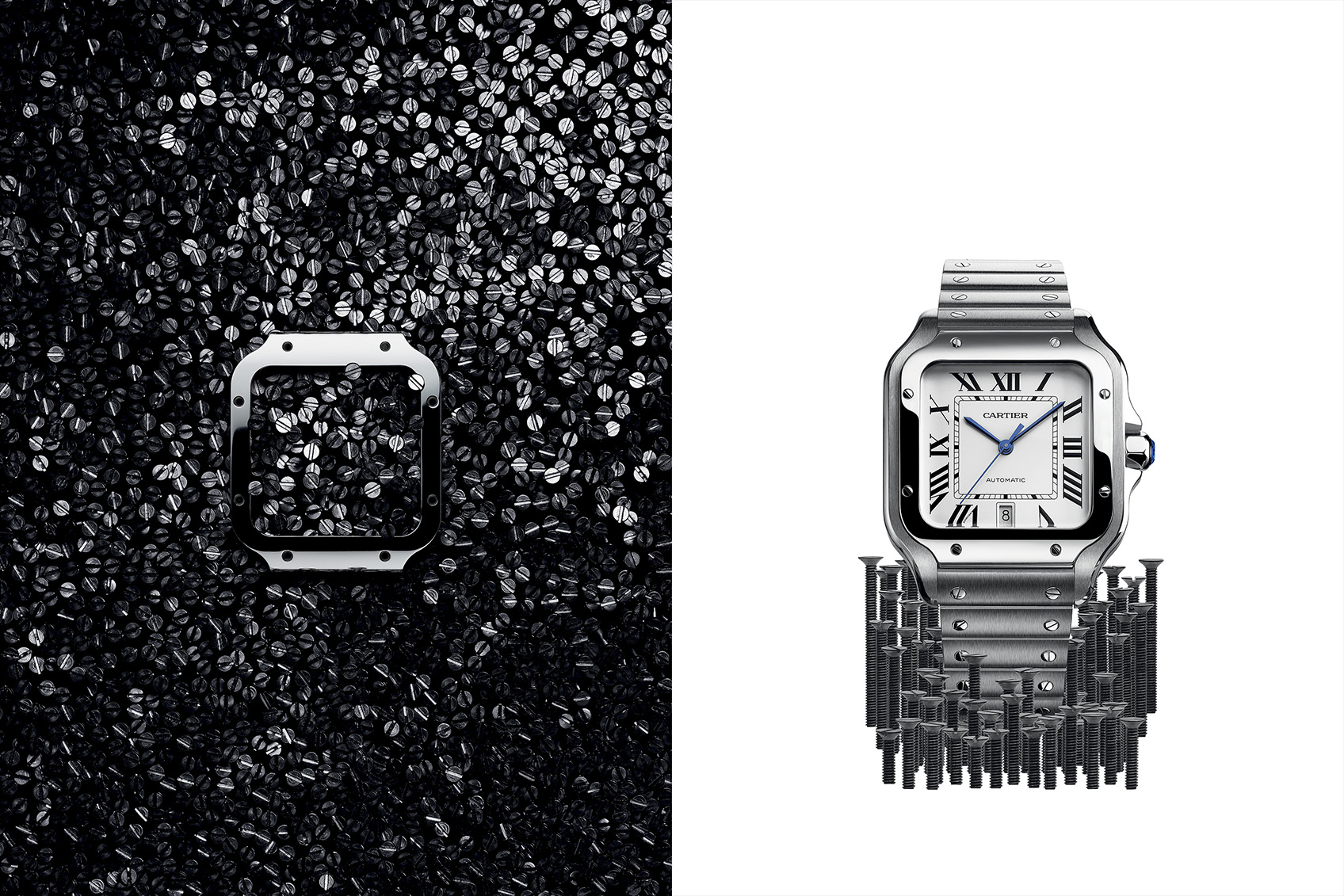 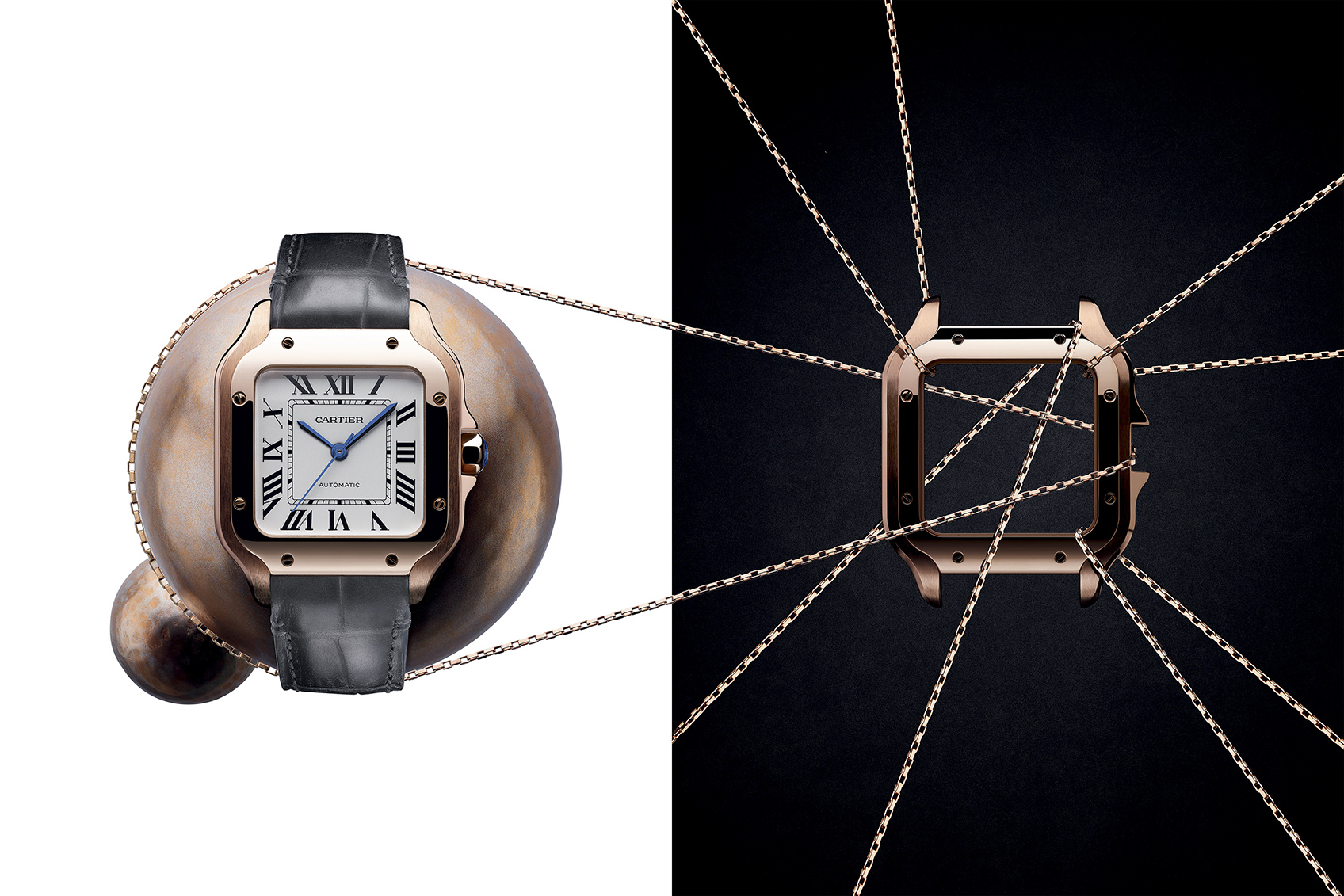 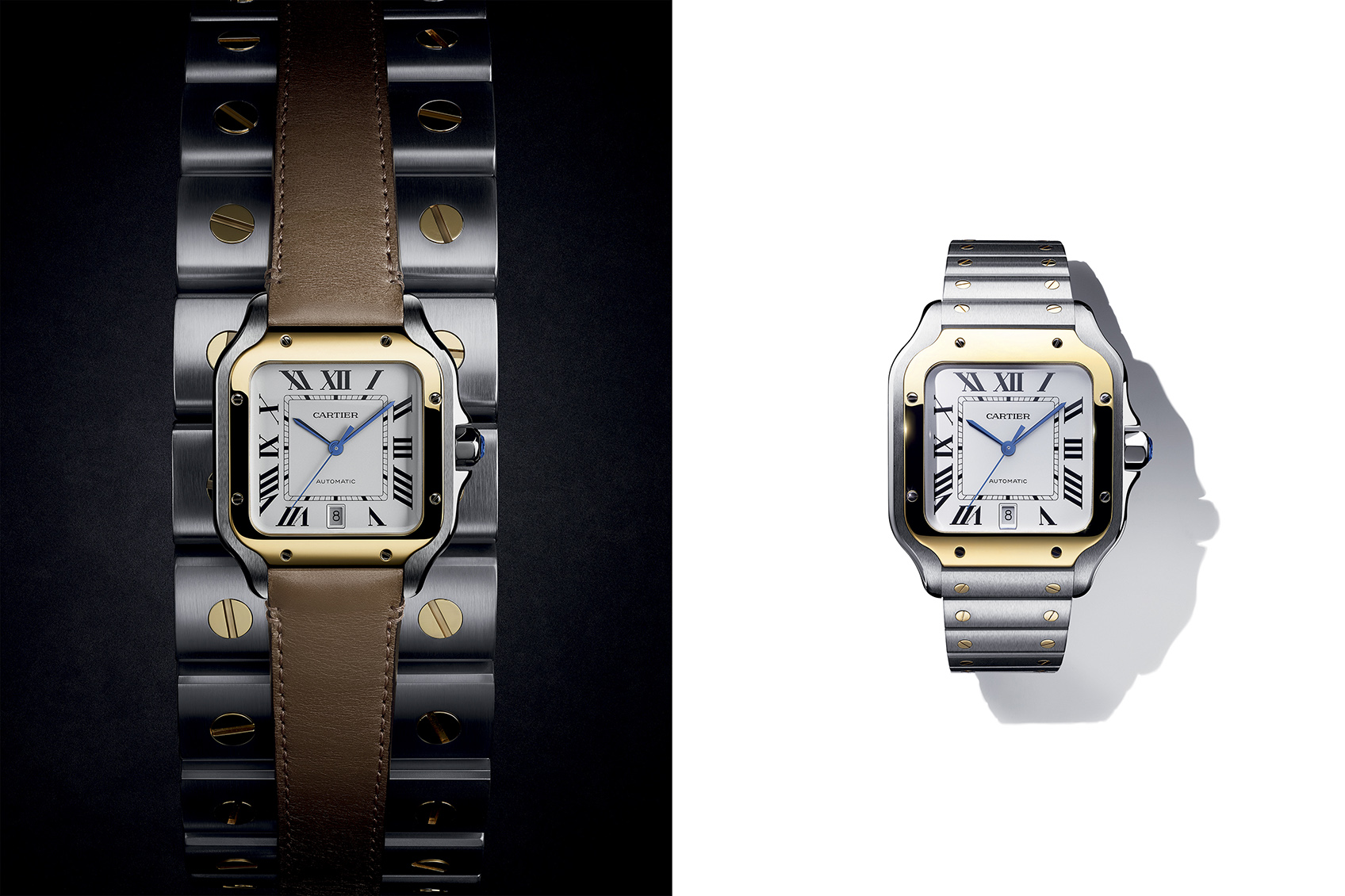 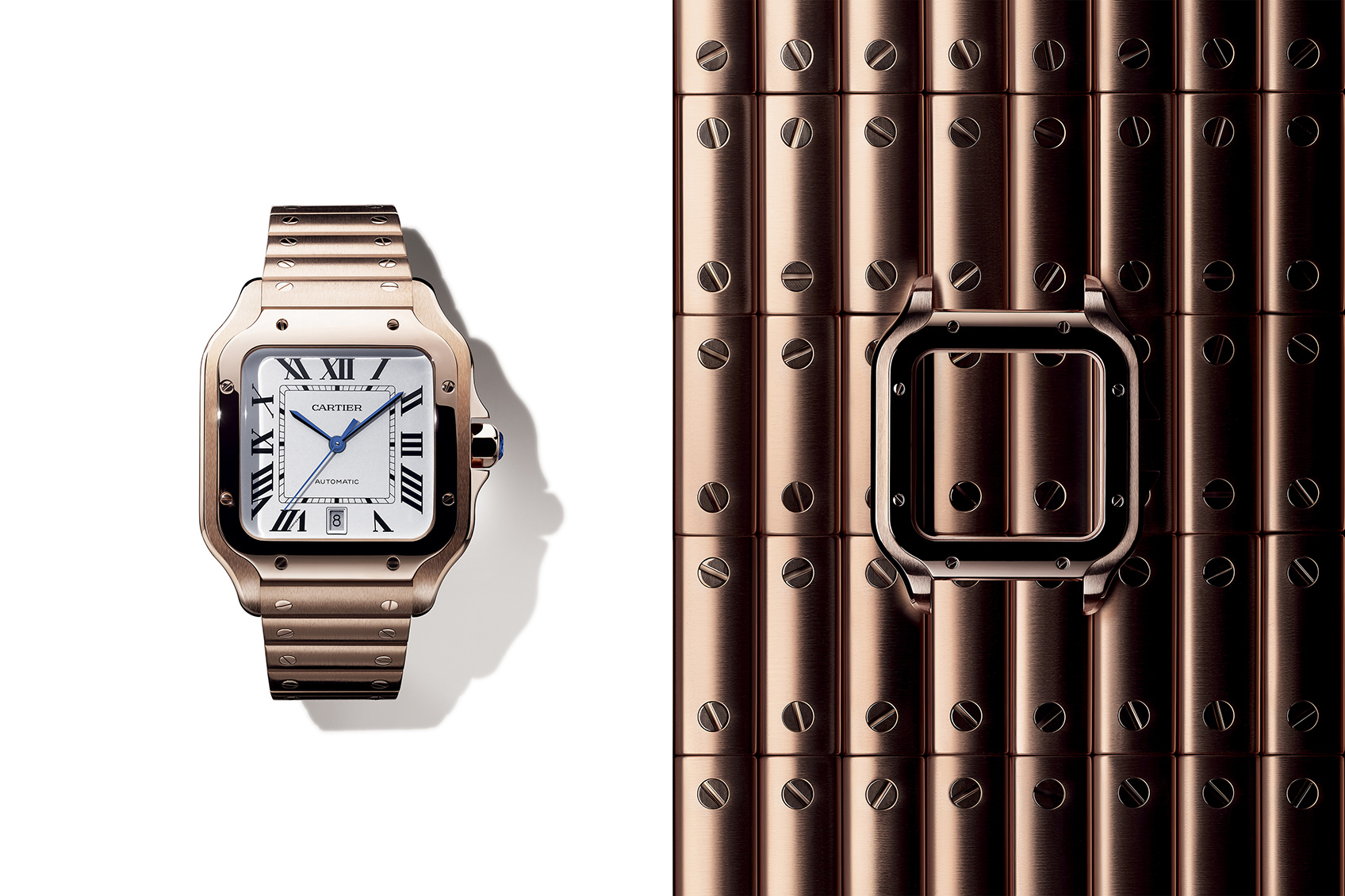 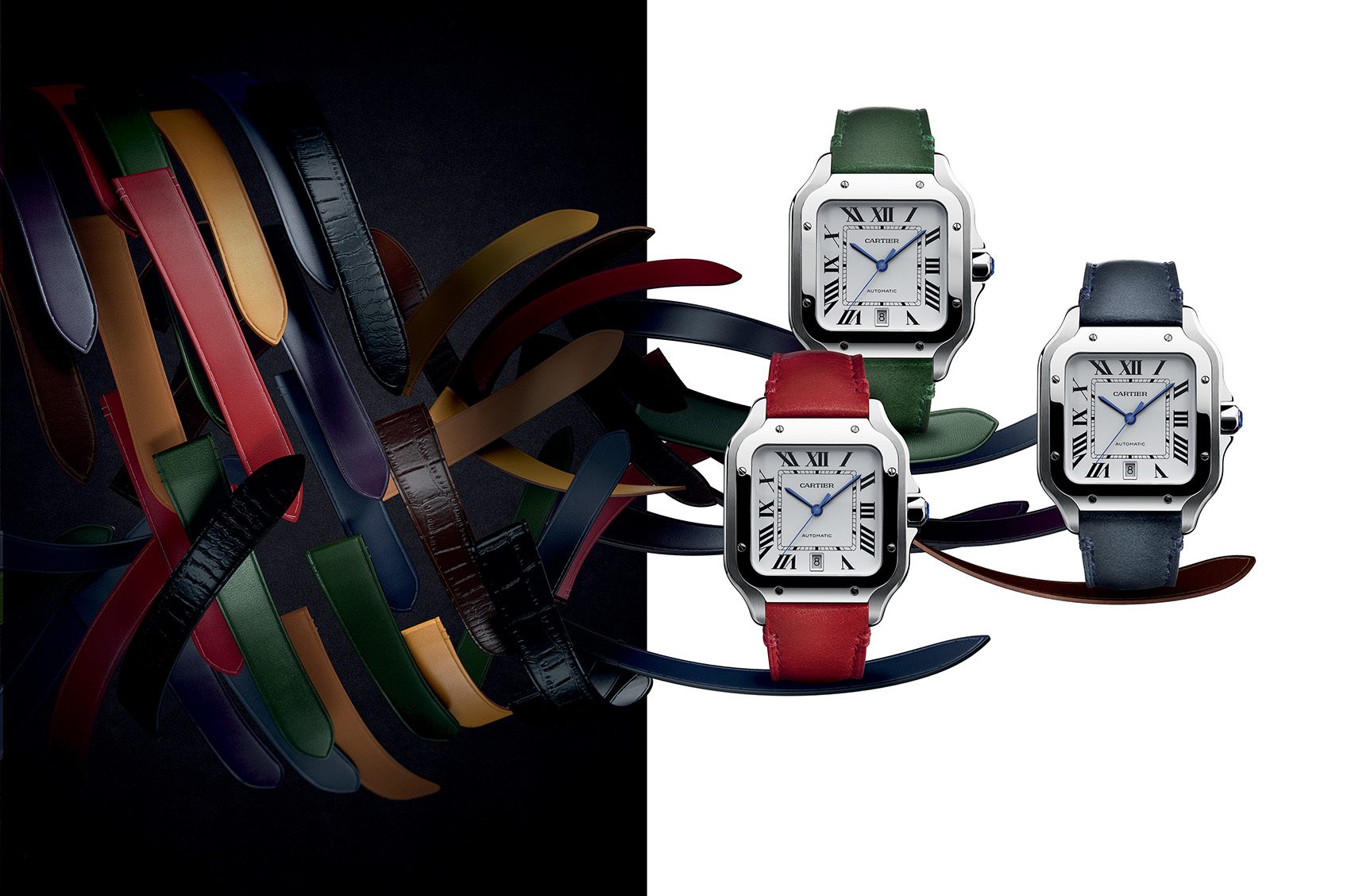 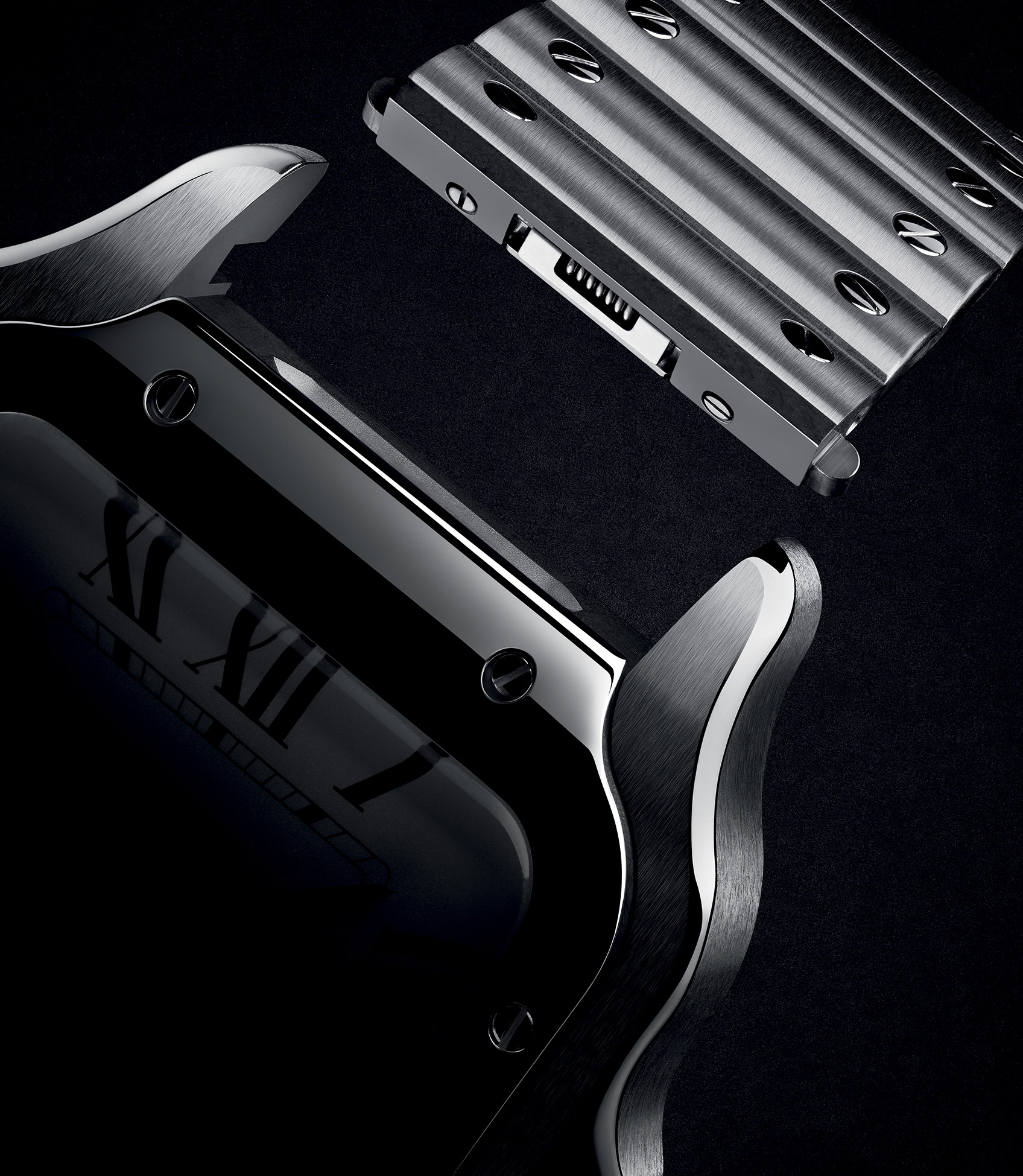 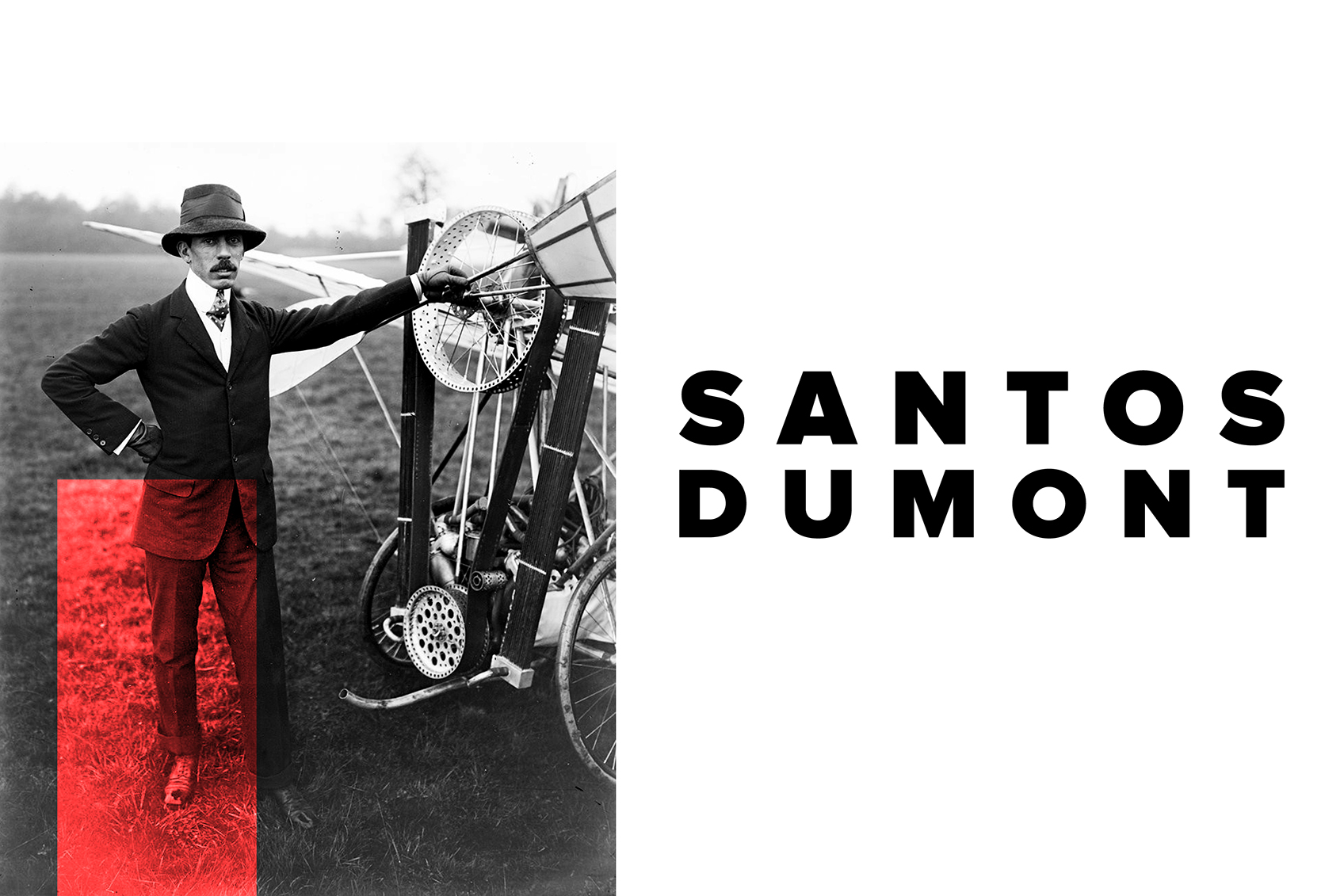 Alberto Santos-Dumont is commemorated around the world with an airport in Rio and a street in Paris named after him, as well as a crater on the moon and a space mission. A gurehead of modern aeronautic engineering who famously piloted the rst hot air balloon ights in 1897 and invented the predecessor of the aeroplane, La Demoiselle, in 1907, Alberto Santos-Dumont was more than just an aviator. His style, personality and sense for innovation made him a thoroughly modern man.

This pioneer of aviation belongs to a brilliant line of men who changed the world on the strength of their independence and perseverance.

The inventor of the future, Santos-Dumont designed 22 ying machines from the airship to the helicopter, monoplane and biplane.

With innovation comes risk, and after becoming the rst person to y around the Ei el Tower in Paris in 1901 he su ered a number of accidents. One spectacular incident saw him parachute onto a building in the Trocadéro. Five years later his 14 Bis biplane took o in Parc de Bagatelle, breaking three world records for ight with a "heavier-than-air” aircraft.

A PRACTICAL SENSE OF STYLE

Loathe to be restricted by his clothing, Santos-Dumont’s cap worn backwards, aviator goggles and custom-made coat criss-crossed with cables hooked up to the commands of his aeroplane made for a unique look that favoured function over fashion. His highly individual style re ected the aesthetic of his generation: comfort that catered to the new modern lifestyle.

A MAN OF CONNECTIONS

He was close to Gustave Ei el, Jules Verne, and other members of the industrial, artistic and scienti c elite. After he met Louis Cartier in 1900 their ensuing friendship was a catalyst for progress. In 1901 the aviator complained of his di culty checking the time on his pocket watch while ying. Three years later Louis Cartier revolutionised watchmaking by inventing the rst purpose-designed modern wristwatch for Santos-Dumont.

Created in 1904, the wristwatch was the product of experimentation by two visionaries and friends, Louis Cartier and Alberto Santos Dumont. Their respective discoveries and projects were inspired by movement. They were to dictate new behaviours and a relationship with the time that ushered in the modern age. 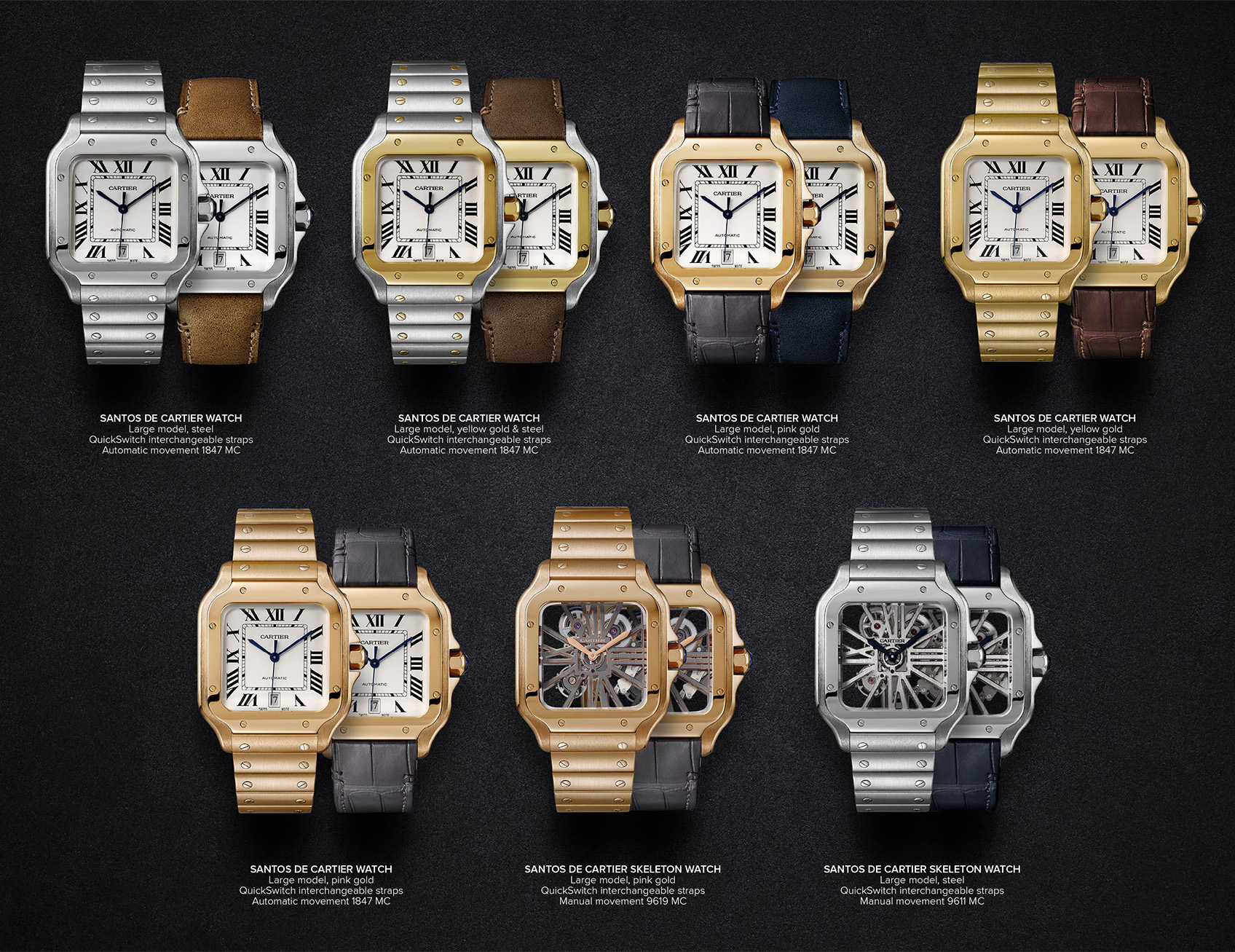 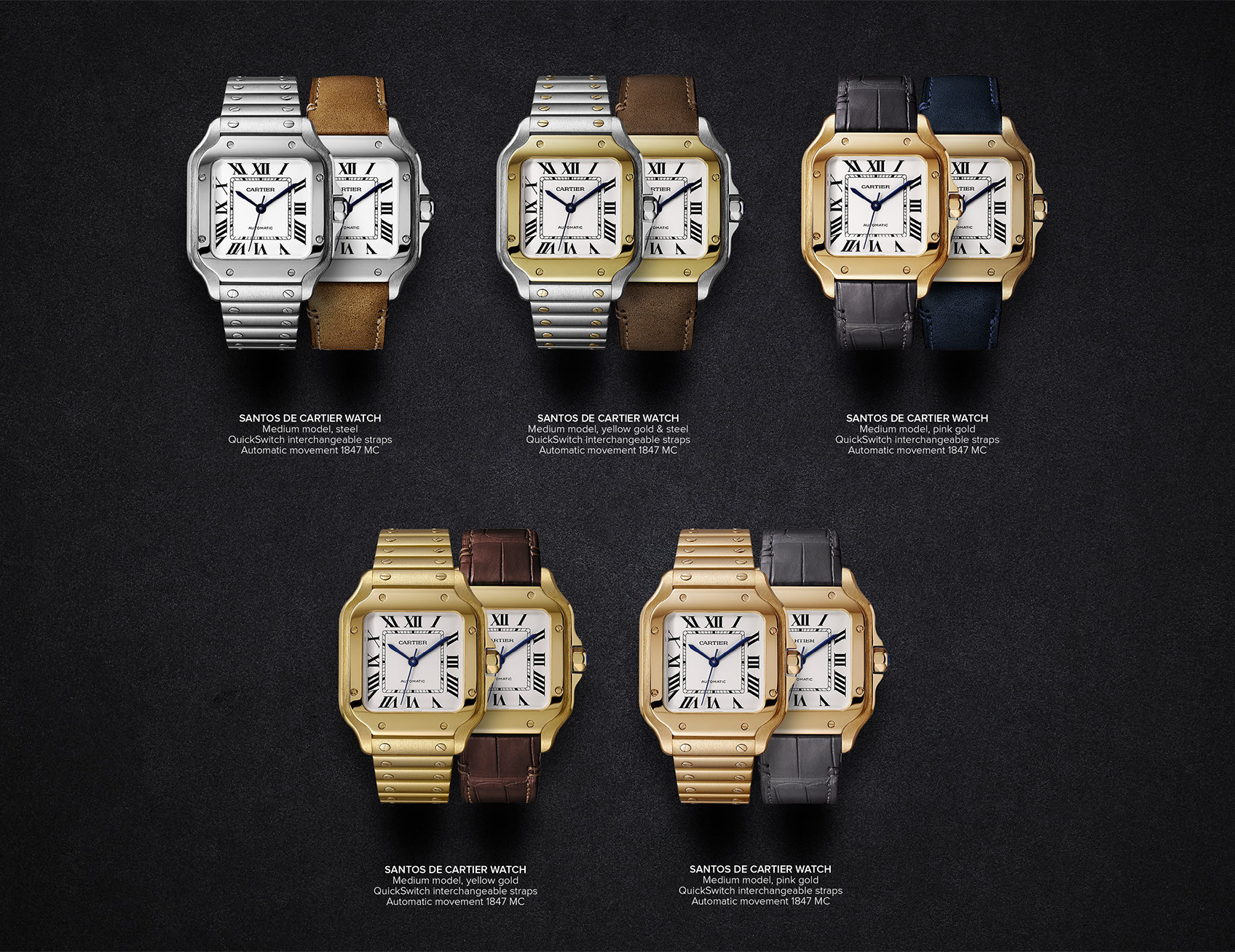